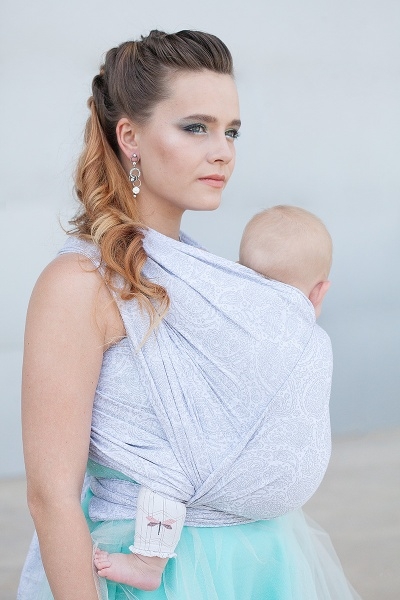 A new luxurious wrap from Ellevill in 50 % Bamboo/50 % organic cotton. Two colored and feels supersoft to your baby's skin.

Paisley or Paisley pattern is a droplet-shaped vegetable motif of Indian and Persian origin, similar to half of the Yin yang symbol. The pattern is sometimes called "Persian pickles" by American traditionalists, especially quiltmakersas far back as 1888.

In Sanskrit the design is known as mankolam and has long been used in India. It resembles a mango and has sometimes been associated with Hinduism.

Some design scholars call the distinctive shape boteh and believe it is the convergence of a stylized floral spray and a cypress tree: a Zoroastrian symbol of life and eternity.

The modern French words for paisley are boteh and palme, the latter being a reference to the palm tree, which, along with the pine and the cypress, is one of the traditional botanical motifs thought to have influenced the shape of the paisley element as we now know it.

All products are a result of fair trade and environmentally friendly production.

The products are designed to be beautiful, comfortable and practical.

The first Norwegian woven wrap was presented in May 2008. Ellevill wraps have managed to establish its name in over 30 countries worldwide.

The success is due primarily to comfort and quality, but the pattern and colors are well established.

"- The most important thing for us, is to offer products that have high quality and comfort, but that is also beautiful."

Our slogan is -"Carry with pride!"